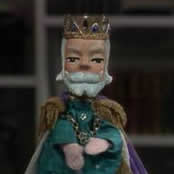 King Friday XIII was born on Friday the 13th, the son of King Charming Thursday XII and Queen Cinderella Monday. He began attending the Kingly School when he was six months old and soon became the King of Upper Afghanistan and eventually King of Calendarland.

King Friday is best known as the ruler of the Neighborhood Of Make Believe where he lives in the castle with his wife, Queen Sara Saturday, and his son, Prince Tuesday. King Friday has two siblings -- Paul and Claire and several nieces and nephews including Nicky, Quentin, Polly, Kevin, and Lady Aberlin. He is also the great-great-great-great grandson of King Monday IX.

King Friday is a proud ruler who attended King and Queen school when he was young. He often finds himself busy with his various kingly duties. He is known to create outrageous and somewhat-random rules within his kingdom and expects everyone to obey his every commands.

Typically King Friday's presence is announced with a fanfare played by the Royal Trumpters. He addresses visitors to the castle by name (e.g. "Robert Troll, I presume.") and expects a respectful response ("Correct, as usual, King Friday.").

A lover of the arts, King Friday enjoys viewing performances throughout the Neighborhood. He, himself, plays the bass violin and often creates kingly versions of commons songs and poems. To help a struggling magician, King Friday established the King Friday Queen Sara Saturday Royal Foundation for the Performing Arts (KFQSSRFFTPA).

King Friday has two pet birds, Mimus Polyglottos and Troglodytes Aedon. He once owned a bird named Cherry which died. As a young boy, King Friday enjoyed spending time talking with the birds in the royal forest. As a result, he is a talented whistler.

One of King Friday's favorite treats is cup custard.[9] According to a Neighborhood census, King Friday can whistle and his favorite color is purple.[10] In his younger days, he was once a pole vaulter.

Retrieved from "https://mrrogersneighborhood.fandom.com/wiki/King_Friday?oldid=4417"
Community content is available under CC-BY-SA unless otherwise noted.